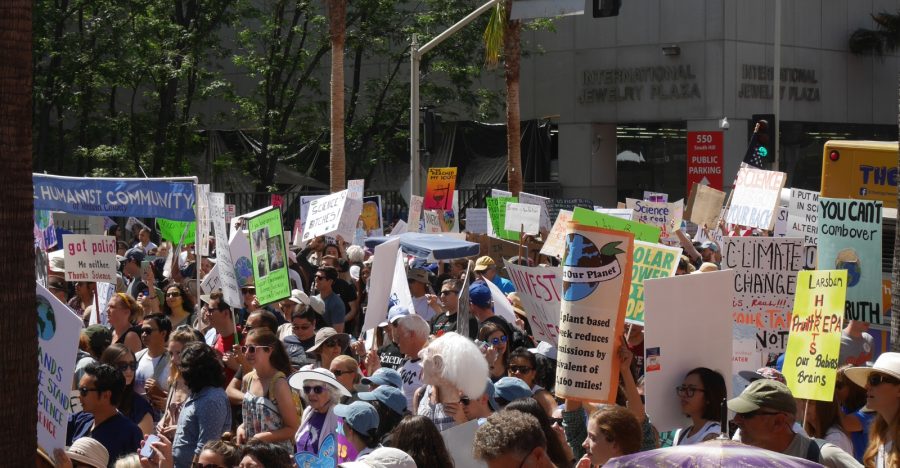 Yesterday was Earth Day, and to commemorate the event, scientists across the United States turned out in force to protest the Trump administration’s proposed cuts in science funding and professed hostility toward climate science. The main March for Science was in Washington, DC, but there were hundreds of other demonstrations in cities across the country, including a sizable one in Los Angeles, which I attended.

My reasons for attending the march were part conviction, part curiosity. I wanted to show support for funding scientific research, and I wanted to see what a pro-science protest looked like. I didn’t have any illusions that this single protest would save research funding. Marchers can’t cause change, especially if they come from outside, participate in the protest, and then leave (as many people did for, say, the Selma to Montgomery March in 1965, and as I did yesterday in LA). Activists, whose day job is organizing communities and placing pressure on political leaders, can cause real change—sometimes. But most people, even those with good intentions, can’t afford to become activists.

With these reservations, I went to Los Angeles and marched, without a protest sign, from Pershing Square to City Hall. Thousands and thousands of other people were there too—some scientists, many obviously not; some carrying signs or wearing costumes, others not. From time to time, someone would start a call-response chant in the crowd. My favorite went like this:

What do we want?

When do we want it?

The poor meter and overall nerdiness of this chant made it seem particularly appropriate for the setting.

The March for Science had been organized on the premise that science is real and should be trusted. This theme appeared in the speeches delivered before the march in Pershing Square, as well as many of the marchers’ signs. Almost all the rhetoric I saw or heard at the march portrayed science only in a positive light, an interpretation that eighteenth-century European Enlightenment thinkers would have appreciated—before World War I, the atomic bomb, and all that. I did see one sign warning that much evil had been done in the name of science too.

For all the rhetoric about how the United States government needs to fund and pay attention to good science, I was disappointed to encounter a considerable amount of bad history at the march. Galileo Galilei was held up (literally, in the case of at least one sign) as a brave champion of science against the oppressive Catholic Church. This characterization of Galileo is well-known, but in fact the Catholic Church was early-modern Europe’s biggest funder of scientific research. The Gregorian Calendar, the modern international standard, was developed based on measurements taken in solar observatories built inside Italian cathedrals. (There is a good, if dense, book about the Catholic Church and astronomy: The Sun in the Church, by J.L. Heilbronn.)

I made mental notes of signs that annoyed me. The sign I hated the most said this:

WE TRIED ANTI-SCIENCE ONCE. IT WAS CALLED THE DARK AGES.

This is so false, I don’t even know where to start. Assuming this is referring to the European Dark Ages (and not some other dark age like the one that occurred in Greece between the archaic and classical periods), this sign is an outrageous abuse of history. The European Dark Ages, which took place roughly between the years 500 and 1000, were a result of the collapse of the political order in western Europe after the fall of the western Roman Empire. With no unifying imperial power in place any more, Europe broke up into countless tiny kingdoms with largely self-contained economies and little trade or communication between them. Even the larger kingdoms formed during this period, such as France or the Holy Roman Empire, remained internally divided between the jurisdictions of local lords. There was much less literature and scholarship produced in Europe during the Dark Ages than there had been during the Roman Empire, but this was a result of economic collapse, not anti-scientific sentiment. And at any rate, the science defended by the March for Science did not exist in the Middle Ages; empirical, experimental science originated in Europe in the seventeenth century.

The March for Science was not all bad history. There was plenty of good history there too; it just didn’t catch my eye like the abuses did. But for me the lesson of the march was this: If you are going to start a movement defending facts, then you should check the facts you are using first. If the facts are outside your discipline, then ask an expert for his or her opinion. I can’t speak for all historians, but I for one would be happy to advise scientists about history.